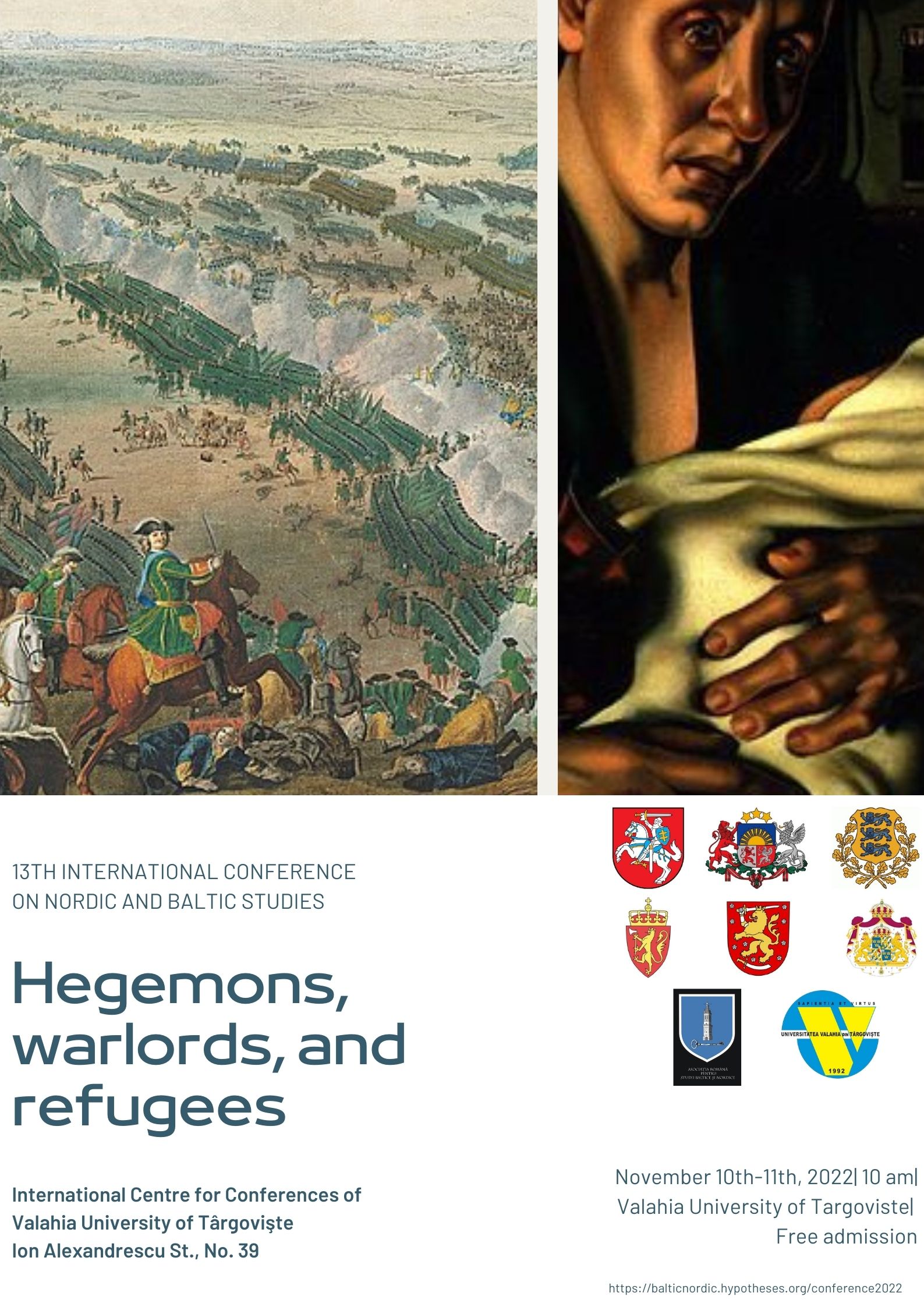 The 13th international conference on Baltic and Nordic studies

The hope that the dystopian Bloodlands of Timothy Snyder (or the “Western Borderlands” to use the term of Epp Annus) may one day become a cradle of peace like Western Europe after the Second World War was dashed in February 2022 when Vladimir Putin initiated the new phase of the war against Ukraine. While President Emmanuel Macron and German Chancellor Olaf Scholz were blindsided by the Russian assault, in Vilnius, Riga, Tallinn, Helsinki, Stockholm, and Copenhagen, the hegemonic pursuit of the warlord of Kremlin provoked alarm but not astonishment. This was the last in a lengthy series of warlords vying for control of the vast lands around the Baltic Sea, Nordic Sea, and Black Sea. As Epp Annus has put it:

“Russia’s aggressive geopolitical posture in the 2010’s has however reactivated questions after the Soviet colonial past and has restored some of the imaginary unity of the former Soviet Union through the facts and fears of Soviets new aggression. Much has changed, as a new era of tension has emerged in Eurasia, and yet the end of the Soviet postcolonial is nowhere to be seen”[1]

But what is the legacy of the hegemonic pursuits of warlords that were drafted from among the Viking raiders, the German knights, the Scandinavian and Polish kings, and the Russian tsars and leaders on Baltic Sea Region and Scandinavia? In what ways was the region redesigned on the political, ideological, geographical, and cultural levels? What difference did they make on the lives of elites and commoners alike? Whether hegemony is defined in terms of political assertion or influence, especially by one country over other nations, masculinity, international leadership, regional hegemony, ideological hegemony, or hegemonic contestation, the term always connotes control, hierarchy, and dependency. Commonly, hegemony is asserted by a warlord (regardless of his authority designation, chieftain, khan, tsar, king, emperor, first secretary, or president), a leader, particularly an aggressive commander with individual autonomy.
What traces of their attempts have been left in culture, art, and public monuments throughout the course of time, and how are they considered in modern times? How has the perspective on hegemons and warlords shifted as a direct result of Putin’s invasion of Ukraine? How this war of aggression has reawakened the memory of previous foreign aggressions in the region, which culminated in Hitler and Stalin’s Pact and conquests during the Second World War?
Hegemonic undertakings and military confrontations have frequently resulted in waves of refugees and displaced individuals, with the apogee of these waves having been reached during the ongoing conflict in the Ukraine. According to the United Nations High Commissioner for Refugees (UNHCR), the number of people who have been forced to flee their homes throughout the world has crossed the significant threshold of 100 million for the very first time in recorded history in 2022.

As Melanie Jacques noted in the introduction of her book ten years ago:

„The tragedy is that the majority of those displaced never really escape conflict. Indeed, people fleeing situations of danger increasingly choose or are forced to remain within their own country and to become internally displaced persons (IDPs).”[1]

It is impossible to quantify the number of refugees in Eastern Europe and the Baltic Sea Region from the Viking raids to the war in Ukraine, but the region unquestionably ranks at the top of the worldwide refugees list. Even when contrasted to the plunders of Viking warriors, Danish kings, Swedish and Polish invaders, and tsarist Russian hegemons of the Middle Ages and Early Modernity, the Modern Age, culminating in the totalitarian regimes of Fascism and Communism, elevated this figure to unprecedented heights. These momentous events were mirrored not just in historical records but also in the works of literary figures, musicians, artists, scientists, filmmakers, journalists, politicians, and dissenters. Aleksander Sochaczewski’s painting „Farewell to Europe” and Tamara de Lempicka’s „Escape” are as vivid as Estonian poet Marie Under’s volumes “Hääl varjust” (Voice From the Shadows), “Rõõm ühest ilusast päevast” (The Joys of a Beautiful Day) and “Õnnevarjutus” (Eclipse of Happiness). Sofi Oksanen’s novels „Stalinin lehmät” (Stalin’s Cows) and „Puhdistus” (Purge) is the match the monument of Gunnar Sønsteby by Norwegian sculptor Per Ung, as well as the exhibits at the Museum of the Occupation of Latvia and Museum of Occupations and Freedom Fights. Danish director Jonas Poher Rasmussen’s recent award-winning film “Flee” is as evocative as Swedish historian Johan Östling’s writings on Swedish narratives of the Second World War and Iceland sstoryteller Lára Garðarsdóttir’s book for children „Bear with me”.
Scholars from the fields of history, military history, cultural studies, international relations, mnemonic studies, literature, arts and visual arts, area studies, political geography, media studies, colonial and postcolonial studies, new media, and interdisciplinary approaches are being called upon to renew the scholarship in fields that are vital to our understanding of hegemonism, warlordism, and the devastating effects on human lives, especially on refugees.